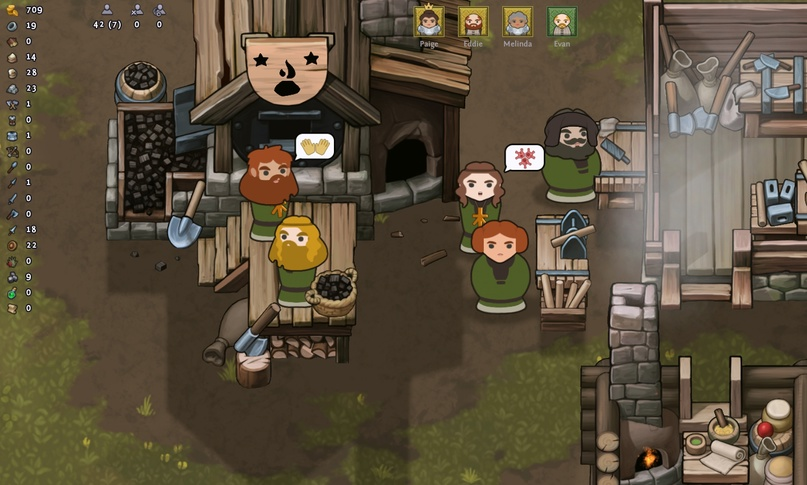 One of the consequences of the decision to divide characters into working and idle classes was that the player lords have a significant amount of free time.Yes, they do tasks to manage buildings, learn and train, study books, and fight and hunt, but they still have free time that they use for entertainment and intrigue.Characters can just chat among themselves over meals, discussing the weather or other topics (icons for these topics are displayed in the conversation cloud), but sometimes they can stop across from each other and start talking more seriously.This is called \"deep communication.\"The type of deep communication the characters choose depends on a variety of factors-their relationship, mutual interest, exposure to alcohol, religious fanaticism, and so on.Thus, they can joke viciously or kindly, support each other amicably, insult, visit during illness, ignore, flatter, flirt, or malign a third person.The last action, intrigue, can be a very powerful indirect weapon.For example, Peter hates Jeremy, yet has a high skill in Eloquence.He begins to constantly intrigue against Jeremy, telling those around him what a scoundrel he is, and may end up inciting a dangerous feud against Jeremy.At the same time, Jeremy may continue to believe that Peter is his friend.Deep communication is much more likely to happen with guests (everyone is interested in hearing gossip from another town), and the player himself can also provoke communication by suggesting that the characters spend time together.You can also send your lords to other towns to intrigue there.Communication is one of the most important ways to change relationships between characters, but there are other factors leading to the generation of stories as well.Characters can simply be irrationally interested in another, jealous of wealth, jealous, and hateful.An important source of potential conflict is social position.Heirs to the throne have a negative bonus to relationships with the king, and those who follow in seniority hate the heirs.Trait ambition intensifies these feelings.Combined with other factors, this can lead to deadly hatred, which can result in killing or poisoning an enemy - and, as a result, taking his place.But sometimes, contrary to ambition, dirty rumors, and envy, characters can become friends.